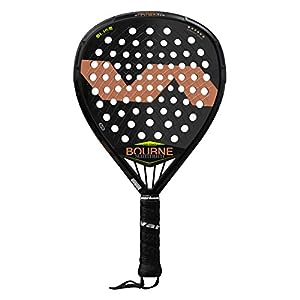 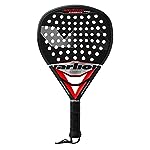 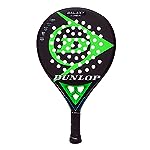 The professional level Varlion padel racket developed and manufactured under a new shape and technology
The Bourne padel racket is the result of the fusion of the racket (diamond shape was in 2001) and Avant (tear shape was in 2009), thus achieving a racket that needs a touch of more power than control in their game
In this model you will find the new prism frame with which we can reduce the contact point of the frame against walls and surfaces by 90%, and by 10% of the air resistance compared to our hexagon frame or other conventional frames, these changes lead to better manoeuvrability of the racket and higher acceleration on all hits
In order to make the new prism frame robust with its special design, we had to make its construction at the most sensitive point (head) through a new, injected adhesive, called prism protection with an exclusive design that adapts perfectly to the prism shape. The design has been carefully crafted to make the weight as low as possible (7g) and also acts as an anti-fog.  Attaches to the frame with 3M adhesive tape
This new bat features a new surface structure on the so-called slice plate designed and developed with a range of curved lines that cause the surface of the ball to connect to them, significantly increasing the effect of other bats with each stroke